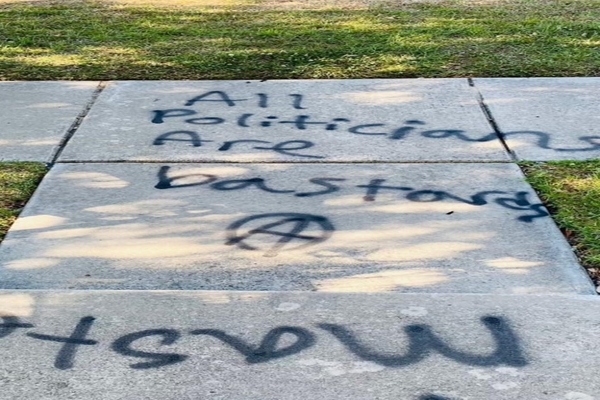 Vandals defaced the home of Rep. Nancy Mace’s (R-SC) house on Memorial Day.  According to photos she released on Twitter showing profanity and Antifa symbols.

“In the early morning hours of Memorial Day, my home, where I’m raising my two children, was vandalized with Antifa symbols and profanity. Although my kids and I are thankfully fine, these criminal acts are unacceptable no matter your politics,” she tweeted.

According to a press release by Mace, the vandals wrote the following on her property.

Mace expressed her frustration over the event:

We should all be able to feel safe in our own homes, regardless of our political beliefs. I sincerely appreciate law enforcement doing all they can to find the criminal trespassers. This is the 2nd time I’ve been targeted for vandalism in the last few months.

There is a significant difference between nonviolent protests and criminal acts of intimidation and vandalism. I’m concerned, too, for my neighbors who’ve been impacted by this appalling criminal behavior.

As I’ve had time to digest what has happened over the last 24 hours, I also wanted to take a moment to urge people to think about their words and their actions. It’s not just social media, but our words impact real people and impact real lives. We should take it down a notch.

Harrritage Action ranks members based on conservative, legislative positions gave Mace a score of 98%, the average score for Republicans is 95%.