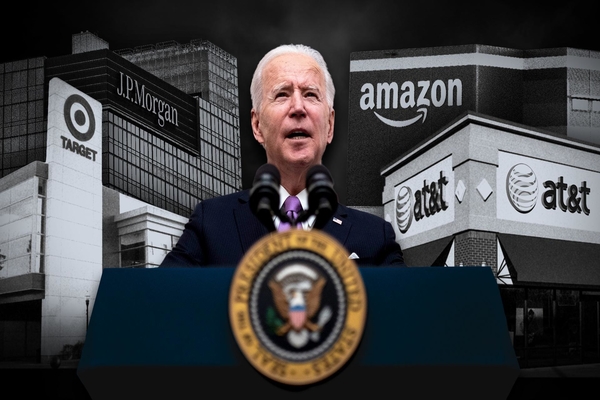 According to a new report of private negotiations between the White House and Senate Republicans, President Joe Biden proposed a way to pay for the infrastructure bill.

The Washington Post reports Biden would not raise the corporate tax from 21 to 28 percent, and instead, he would propose a minimum corporate tax of 15 percent – for companies like Amazon that pay almost nothing in federal taxes.

Republicans have refused to allow any of Biden’s widespread corporation tax hikes to pay for his infrastructure bill, but a bill focusing on global corporations that enjoy widespread tax advantages may appeal to more populist Republicans in the Senate.

White House spokeswoman Jen Psaki said Biden’s proposal “should be completely acceptable” to Republicans that want to leave 2017 corporate tax cuts in place, she said. “We’re open to other options,” Psaki said, as long as they do not hike taxes on people making less than $400,000.

The Biden alternative assumes $1.7 trillion in revenues over 15 years to pay for new spending over eight years.

Corporations are likely to oppose the idea and lean heavily on their political influence operations in Congress to kill the proposal.

Biden had expressed outrage during a speech regarding infrastructure back in March that 91 of the Fortune 500 companies paid little-to-no federal taxes.

“In 2019, an independent analysis found that are 91 — let me say it again, 91 Fortune 500 companies — the biggest companies in the world, including Amazon — they used various loopholes so they’d pay not a single solitary penny in federal income tax,” Biden said. “I don’t want to punish them, but that’s just wrong. That’s just wrong. A fireman and a teacher paying 22 percent? Amazon and 90 other major corporations are paying zero in federal taxes?”