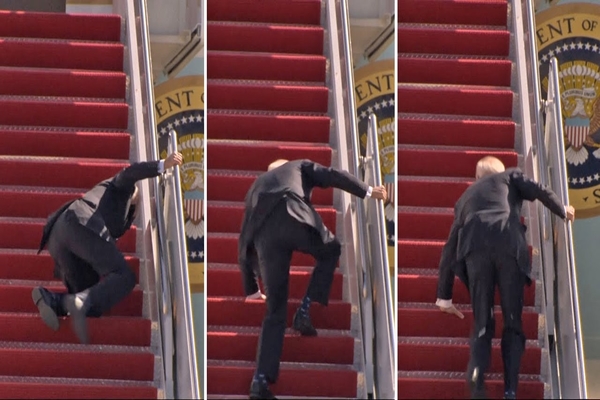 President Joe Biden stumbled and fell while climbing to board Air Force One Friday.

Biden stumbled twice before falling to his knee.  He pulled himself up and boarded the plane; he turned around and delivered a salute.  He entered the plane for a scheduled trip to Atlanta, Georgia, where he is expected to meet with Stacey Abrams.

Many were quick to note the stunning double standard applied to the current and former presidents.

“I remember the press bashing Trump for touching the rail once,” wrote Donald Trump, Jr.

“Biden falls repeatedly, but I’m sure he’s the picture of health,” he added. “No wonder all our enemies are pouncing simultaneously and mocking him publicly.”

“Someone should ask him about this at his press conference,” he added.

“I expect the NYT to have a whole story speculating on Biden’s health after he fell three times walking up the steps,” wrote columnist Eddie Zipperer.

Biden, then president-elect, fractured his foot in December while playing with a dog after a shower.

“What happened was I got out of the shower. I got a dog. And anybody who’s been around my house knows, dropped — the little pup dropped the ball in front of me, and for me to grab the ball. And I’m walking through this little alleyway to get to the bedroom,” Biden recounted in an interview with CNN. “I grabbed the ball like this, and he ran, and I was joking, running after him to grab his tail. And what happened was that he slid on a throw rug, and I tripped on the rug he slid on. That’s what happened.”

Thursday, Biden referred to Vice President Kamala Harras as “President Harris” and he did not correct himself.

“I know folks have seen that President Biden slipped on his way up the stairs to AF1, but I’m happy to report that he is just fine and did not even require any attention from the medical team who travels with him,” Bedingfield wrote on social media.

“Nothing more than a misstep on the stairs,” she added.