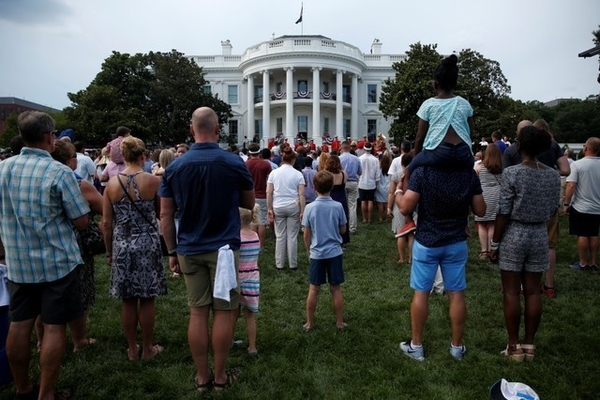 President Biden is focused on vaccines as voter dissatisfaction on surging crime and illegal immigration soars.

The crowded South Lawn represented celebration scenes across the country.  Inside the White House, there was concern about the optics of the July 4th party; however, there was no consideration of canceling the event.

During Biden’s July 4 speech, he highlighted the coronavirus pandemic, “This year the Fourth of July is a day of special celebration, for we’re emerging from the darkness of a year of pandemic and isolation, a year of pain, fear, and heartbreaking loss.”

“Today, we’re closer than ever to declaring our independence from a deadly virus. That’s not to say the battle against COVID-19 is over. We’ve got a lot more work to do.”

The areas of dissatisfaction, his position on defunding the police, the surging crime rate, or actions to stop the illegal border crossings were not mentioned by Biden.

On Saturday, the Washington Post revealed that “33 percent of Americans say they approve of how he is handling” illegal immigration on the southern border. Among Democrats, only 63 percent approve of his handling of immigration.

Meanwhile, only 38 percent of Americans approve of Biden’s handling of crime, while 48 percent disapprove, as indicated by the Post.

The Associated Pressed stated the July 4th speech “was a long-awaited opportunity to highlight” coronavirus during the “largest” event “yet of his presidency, the clearest indication yet that the U.S. had moved into a new phase of virus response.”

“Biden wanted all Americans to celebrate, too, after enduring 16 months of disruption in the pandemic and more than 605,000 deaths. The White House encouraged gatherings and fireworks displays all around the country to mark — as though ripped from a Hollywood script — the nation’s ‘independence from the virus,” the AP continued to echo Biden’s hyper-focus.

While Biden is hyper-focused on the pandemic, the illegal border crossings are up nearly 700 percent from May 2020.  Democrat-run cities have crime surging all while they call to defund the police.