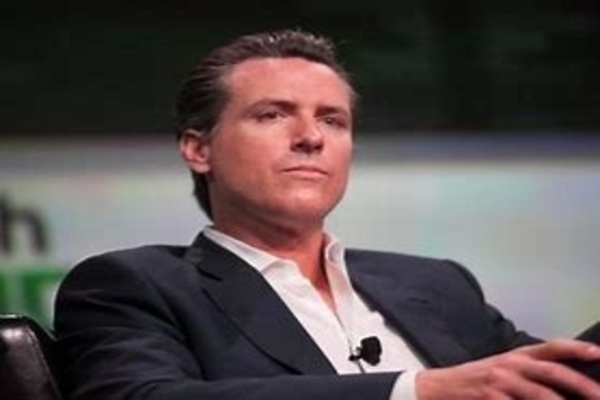 During a visit to downtown Oakland, California, Gov. Gavin Newsom (D) was confronted by an aggressive individual; a man has been arrested on suspicion of assault.

While Newsom was walking to a barbershop and pizzeria in Old Oakland to promote small businesses, he was “approached by an aggressive individual,” stated Fran Clader, director of communications for the California Highway Patrol, which provides security for the governor.

Officers removed Newsom, and the 54-year-old man was arrested, she said.

Newsom appeared uninjured; he joked to reporters that people have a different way of saying allow, reported East Bay Times.  According to law enforcement sources who allegedly spoke with the East Bay Times, the assailant threw a bottle of water at the governor.

The man was taken to Alameda County jail, where he was booked to investigate resisting an executive officer and assaulting a public official.

A woman identified as the suspect’s sister was reached on the phone; she described him as a homeless man with severe mental health problems. She said the allegation made by authorities was “consistent with his past behavior.”

The assault highlights the problem with growing homelessness in California.  Newsom announced a plan last month to spend $12 billion to combat the crisis as part of his $100 billion “California Comeback Plan.”

Newsom defends his record on this issue as he responds to the national criticism from Republicans.  The homeless problem is growing; the San Francisco Chronicle reported in 2019 that Oakland’s homeless population rose 47 percent in two years. Last month, a group of Oakland residents built a “community center” at a homeless camp under a highway overpass.

San Francisco Mayor London Breed’s latest budget requests $1 billion to help with the homeless epidemic in the City.  According to the San Francisco Chronicle, some sources estimate there are 17,000 homeless individuals.

Last month it was reported that San Francisco is spending $16.1 million for 262 tents to house the homeless in empty lots around the City in what officials call “safe sleeping villages.” The cost of this endeavor breaks down to $190 a night or $61,000 per tent per year.

Last year San Francisco officials housed the homeless population in city-leased hotels; they distributed alcohol, tobacco, medical marijuana, and other substances to keep them quarantined and leaving hotels to get their fix on the streets.