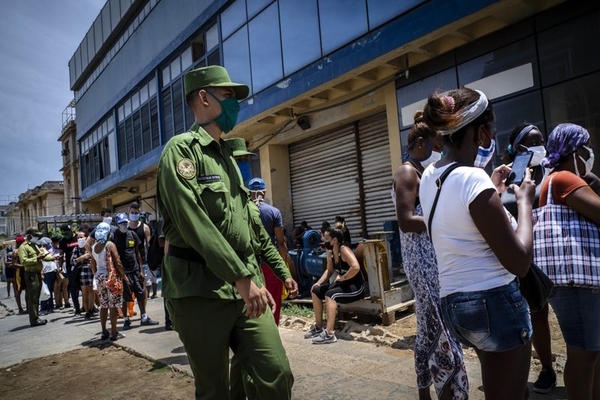 The Cuban Communist Party is forcing suspected coronavirus patients to take unproven antiviral treatments while in densely populated “camps, which are unsanitary and poorly stocked. Eyewitnesses say in a report revealed this weekend.

The Global Liberty Alliance (GLA) verified Cuban citizens’ ongoing reports in “isolation centers” if they suspected of carrying the Chinese coronavirus.  The organization confirmed the dire medical status of the camp located in central Santa Clara.

“A government’ survey taker’ (encuestadora), allegedly connected to the Ministry of Public Health, knocks on citizens’ doors daily, asking how many people live in each home and whether they are experiencing respiratory or fever-like symptoms,” the GLA confirmed. “Suspected COVID [Chinese coronavirus]-positive cases are being transported to an ‘isolation center,’ which is a minimally converted school. They are isolated for five days, given the PCR COVID-19 test, and if tested positive, are sent to the Military Hospital. If they test negative, they must remain five more days before being PCR tested again.”

Prior reports from Cuban independent media are corroborated.  The “isolation centers” are poorly run. The potential coronavirus patients are close enough to allow the virus to spread in the facility.  Food provided by authorities is nearly inedible, according to many reports. Cubanet, an online outlet, provided photos of one of the “meals” at Havana camp.  It appears to like two boiled eggs, along with a cooked unidentified root vegetable and rice.

Perhaps the most unsettling in the GLA report is that the Cuban government is administering unproven interferon treatment on people who test positive who have moved from the converted school facility to the military hospital camp.

“In some cases, a COVID-negative person can accompany patients in the hospital. The COVID-negative companions are given drops of Nasalferon … twice daily to prevent contagion, while the COVID-positive patients are given interferon shots,” the GLA report detailed.

The confirmation repeats reports in Cuba state media stating that nasal interferon treatments (nasalferon) would be available to be used at home for individuals testing positive but not needing hospitalization.

Antivirals such as Interferons can have extreme side effects.  Over the past year, Cuba has promoted interferon use, despite the lack of scientific evidence for the treatment.

“When the Government of Cuba assures that the Interferon developed in Cuba cures the coronavirus, it is committing a serious crime against world public health, since this drug not only lacks any scientific proof but also where it has been tested has already given null results of encouragement,” a group of doctors denounced in April 2020 in response to the campaign, in a statement via the human rights organization Cuban Prisoners Defenders.

The interferon treatment could “kill, rather than cure patients,” the doctors warned.

Minimal international support from the scientific community has been given to Cuba in the pursuit of interferon treatment.

South Africa has bought into the interferon theory, and the military bought doses of Interferon-alpha-2b from Havana last year.  It is unclear how the military came up with $16.8 million to purchase the antivirals or who would have access to it.  There is an investigation from the South African Defense Force in place.

“According to reports, however, the medical professionals are not documenting people’s health conditions and status accurately,” the report noted. “They have tried to give interferon to COVID-negative companions instead of the COVID patient, and have tried to give excessive doses of Interferon to patients, allegedly due to poor documentation.”

The patients are forced to do their cleaning.

“The cleanliness in the center is ‘awful,’ with patients having to clean most spaces themselves, which further contributes to contamination,” the report detailed. “The only space cleaned by staff is the common walkway between beds; everything else is left dirty. No bleach is available unless patients befriend cleaning staff.”