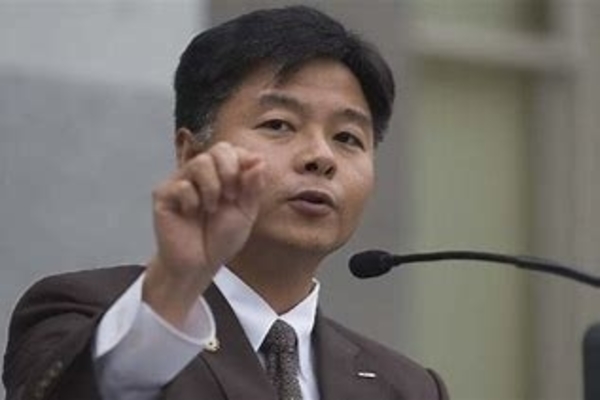 Rep. Ted Lieu (D-CA) flaunts his support for abortion and same-sex messages, all while challenging the U.S. bishops to refuse him Holy Communion during mass.

“Dear USCCB, I’m Catholic, and I support contraception, a woman’s right to choose, treatments for infertility, the right for people to get a divorce, the right of same-sex marriage,” Lieu tweeted Friday.

“Next time I go to Church, I dare you to deny me Communion,” he taunted.

The congressman enjoys a 100% rating from lobbyist NARAL for his favorable record of abortion rights.

Lieu continues to tweet: “How radical is the @USCCB decision? A Catholic can love Jesus with all her heart, oppose abortion & work at Catholic Relief Services. But if she believes government shouldn’t put women in jail for an abortion, then she can be denied Communion.”

“No wonder membership is declining,” he stated.

Lieu is one of the sixty house Democrats who signed a “Statement of Principles” on Friday,  asking for  “primacy of conscience” as justification for promoting abortion, which the Catholic Church considers a very grave sin.

“We solemnly urge you to not move forward and deny this most holy of all sacraments, the source and the summit of the whole work of the gospel, over one issue,” the lawmakers wrote in a statement.

On Friday, the U.S. bishops overwhelmingly voted in favor of drafting o document on the reception of Holy Communion.  This has become an intense topic following President Biden’s election; he is a professed Catholic who supports abortion rights expansion.

In response to that vote, Ted Lieu called the leaders of the Catholic church “hypocrites” for failing to deny former Attorney General William Barr Communion for expanding the use of the death penalty.

“You are being nakedly partisan, and you should be ashamed. Another reason you are losing membership,” he wrote.

The Catholic Church teaches that taking innocent life in abortion to be gravely evil and declared Catholic politicians are obliged to oppose laws permitting abortion or euthanasia, noting that “it is impossible to promote such laws or to vote for them.”

The Catechism of the Catholic Church states, “From the first moment of his existence, a human being must be recognized as having the rights of a person — among which is the inviolable right of every innocent being to life.”

Abortion “is gravely contrary to the moral law,” the Catechism declares, and, therefore, a person who procures an abortion incurs ex-communication from the Church “by the very commission of the offense.”

St John Paul II wrote, “direct abortion, that is, abortion willed as an end or as a means, always constitutes a grave moral disorder, since it is the deliberate killing of an innocent human being.”

Cardinal Joseph Ratzinger, the future Pope Benedict XVI in 2001, declared that not all moral issues “have the same moral weight as abortion and euthanasia,” which are grave evils that allow for no legitimate diversity of opinion.

The cardinal explicitly distinguished abortion and euthanasia from the application of the death penalty and the question of a just war, where he said a diversity of opinion is possible.

Concerning reception of the Eucharist, Ratzinger wrote that the minister of Holy Communion “may find himself in the situation where he must refuse to distribute Holy Communion to someone, such as in cases of a declared ex-communication, a declared interdict, or an obstinate persistence in manifest grave sin.”

He went on to write:

Regarding the grave sin of abortion or euthanasia, when a person’s formal cooperation becomes manifest (understood, in the case of a Catholic politician, as his consistently campaigning and voting for permissive abortion and euthanasia laws), his Pastor should meet with him, instructing him about the Church’s teaching, informing him that he is not to present himself for Holy Communion until he brings to an end the objective situation of sin, and warning him that he will otherwise be denied the Eucharist.

“When these precautionary measures have not had their effect or in which they were not possible, and the person in question, with obstinate persistence, still presents himself to receive the Holy Eucharist, the minister of Holy Communion must refuse to distribute it,” he said.