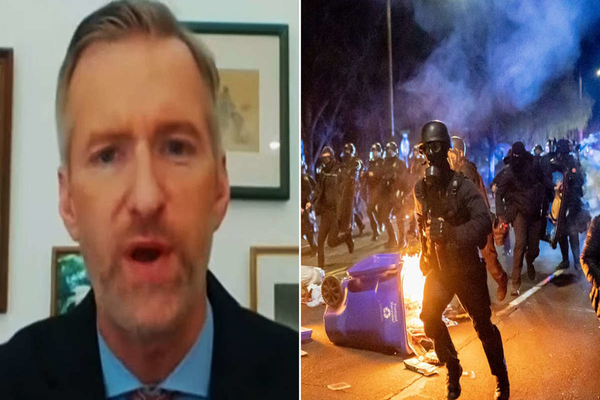 “We must stand together as a community against this ongoing criminal intimidation and violence,” Mayor Wheeler said on Friday. “Our job is to unmask them, arrest them, and prosecute them.” He also urged the public to stand together and “take the city back.”

“People know who these criminals are,” Wheeler continued.

A few hours later, a social media post called for demonstrators to “Bloc Up” – a reference to the “uniform” of Antifia’s all-black clothing, masks, and helmets.

Demonstrators began blocking roadways, smashing windows, vandalizing, and forced their way into an occupied restaurant; police declared the incident to be a riot and ordered the protesters to leave, Fox 12 Portland’s Drew Maring tweeted.

Wheeler extended the city’s state of emergency and directed Portland Police Bureau officials to “arrest people engaged in any crimes,” The Oregonian reported. He supports the tactics of “kettling” (boxing people in).

Protesters claim the Mayor had misused their expressed words earlier in the week, when they drafted an open letter to demonstrators, the local NBC affiliate stated.

In part, the letter to the violent protesters said, “actions that neither increase solidarity nor broadcast purpose while making the lives of local Black communities more difficult are not acceptable.”