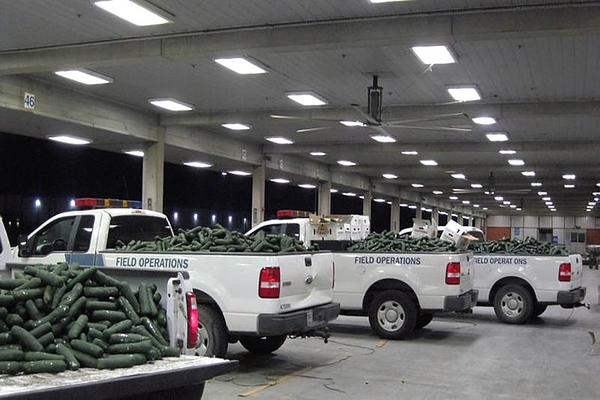 CBP officers tasked with patrolling an international cargo facility in Pharr, Texas, spotted a tractor-trailer trying to enter from Mexico for inspection.

The interviewing officer directed the tractor-trailer driver to a secondary inspection station, according to information obtained by Price from CBP officials in Texas.

The CBP officials ran the tractor-trailer vehicle through “a non-intrusive imaging inspection and cursory search from a K-0 trained to detect drugs and human cargo.” CBP officers were further compelled to conduct a physical search of the vehicle.

The search leads to the officers discovering 468 packages of methamphetamine. The officer’s reports noted the drug packages weighed 1,179.47 pounds, with a street value is estimated to be around $16,512,400.

“This massive load of methamphetamine will not reach our city streets thanks to our CBP officers and their great teamwork and utilization of all available tools and resources,” said Carlos Rodriguez, port director of Hidalgo/Pharr/Anzalduas Port of Entry.

The tractor-trailer, along with the drugs, were confiscated by the officers. The case is being reviewed by U.S. Immigration and Customs Enforcement (ICE).