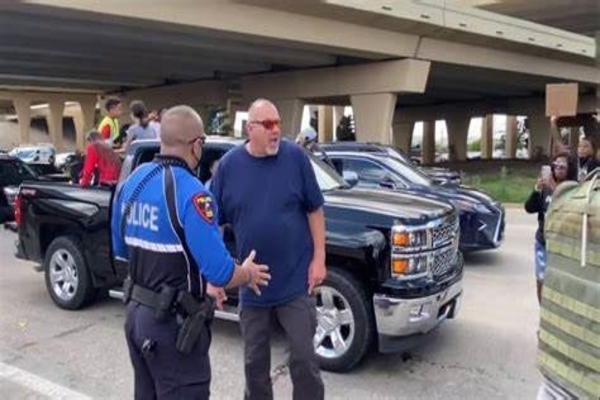 A major intersection in Plano, a suburb of Dallas, was blocked by a group of BLM protestors earlier this week, marching through the streets to raise awareness about the death of Marvin Scott III. A video tweeted by New Granada shows many of the protesters wear body armor, black bloc, and helmets.

In a now-viral video, demonstrators are seen blocking an intersection as they shout “Black Lives Matter” and wave signs reading “stop killing us” and other slogans. A large column of automobiles can be seen forming as motorists wait for the road to clear. Suddenly, a large man wearing sunglasses weaves between the stopped cars and heads straight towards the protesters.

The Mexican flag was carried by at least one protester while blocking the intersection of two freeway feeder roads.

The driver’s attention turns to the Plano Police Department officer, who appears to be unwilling or unable to clear the intersection. “Get these f** king people out of the way,” the man yells at the officer. “Get them out of here.”

As the man’s attention turns back to the protesters, it appears he swings his fist at a female protester.

The protester confronts the man; the officer attempts to separate the opposing sides. The officer moves the man back to his vehicle as the protesters continue to engage the man.

The Texas Legislature is considering legislation; blocking a roadway would be a state jail felony. Protesters may not block the passage of an emergency vehicle or if the entrance to a hospital, the Texas Tribune reported.

The bill, if passed, will provide a sentence of up to six months in State Jail. It also includes a minimum of ten days in jail regardless of previous criminal history.

HB-9 passed out of the Texas House of Representatives by a vote of 90-55 and headed to the Senate for consideration.

The bill from the Texas legislature comes in response to an incident in California last year where two deputies were shot, and protesters blocked the entrance to the hospital, the Tribune explained.

“In an emergency, seconds matter,” State Representative Stephanie Klick (R) said from the House floor while presenting the bill for a vote. “We all have a constitutional right to peaceably assemble under the First Amendment, but what we don’t have is a right to prevent authorized emergency vehicles that can provide life-saving care.”