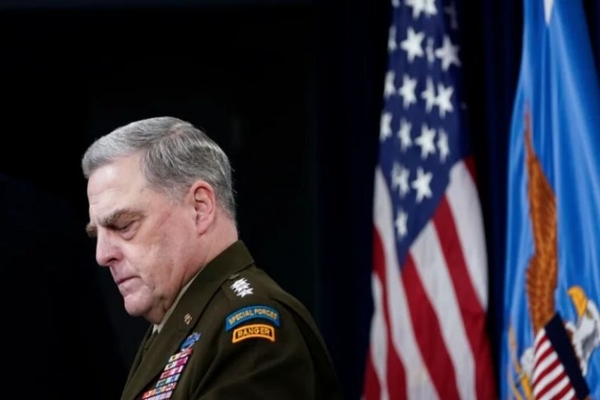 Gen. Mark Milley claimes that calls to his China counterpart were “routine” and fell “perfectly within the duties and responsibilities” of his job.

Milley, in his first public acknowledgment of the calls, stated they were “to reassure both allies and adversaries in this case in order to ensure strategic stability.”

The Joint Chiefs of Staff chairman stated his case while speaking to the Associated Press (AP) and another reporter while traveling to Europe.

Milley chose to only offer up a brief defense of his calls, saying he plans a deeper discussion about the matter for Congress when he testifies at a hearing later in September. He told the outlet:

I think it’s best that I reserve my comments on the record until I do that in front of the lawmakers who have the lawful responsibility to oversee the U.S. military.

I’ll go into any level of detail Congress wants to go into in a couple of weeks.

Both Milley and Defense Secretary Lloyd Austin are scheduled to testify before the Senate Armed Services Committee on September 28, although confusion continues over who said what and to whom.

The appearance was meant to be a hearing on the withdrawal of troops from Afghanistan and the hasty evacuation of Americans and others from the country.

The focus of the meeting has changed as the public has been made aware of the two calls made by Milley to Gen. Li Zuocheng of the People’s Liberation Army to assure him the U.S. had no intention of attacking China.

Critics demand to know why Milley has potentially breached the basic principle of civilian control of the military and its vital role in American democracy.

A special House committee investigating the Jan 6 protest has asked for details of Milley’s disputed calls to China.

U.S. Reps. Bennie Thompson, D-Miss., and Liz Cheney, R-Wyo., committee leaders, have also sought records related to the November election, the transfer of power from Trump to Biden, and the D.C. riot.

As AP reports, the White House and the Pentagon chief state they have complete trust and confidence in Milley.

Former President Trump responded to the revealed calls and demanded a trial, as reported by Breitbart News.

“If the story of ‘Dumbass’ General Mark Milley … is true, then I assume he would be tried for TREASON,” Trump said. “He would have been dealing with his Chinese counterpart behind the President’s back and telling China that he would be giving them notification ‘of an attack.’ Can’t do that!”