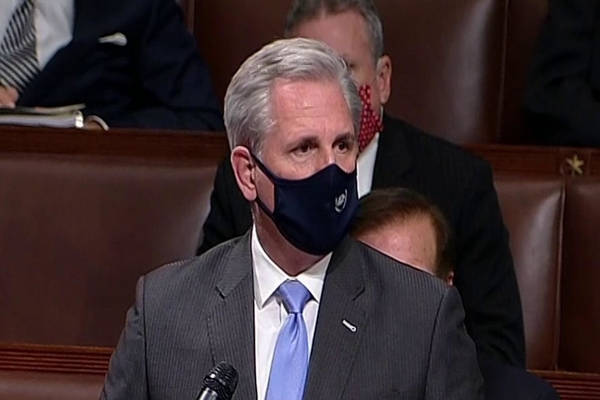 The mammoth $1.7 trillion Build Back Better Act passed on partisan lines; there was bipartisan support against the legislation.

The Build Back Better Act serves as a large expansion of social welfare and climate change programs; it was found by the Congressional Budget Office (CBO) to add $750 billion to the deficit over five years.

His speech continued despite interruptions from the impatient Democrats.

The “magic minute” House floor procedure allows House leaders like McCarthy and Pelosi to speak unabated until they are finished.

McCarthy used his time to lash out at President Biden and congressional Democrats. He blasted the steady stream of crises facing the country, including ballooning inflation, disruption in the supply chain, and the deadly Afghanistan withdrawal.

“This is the single most reckless and irresponsible spending in the history of this country,” McCarthy said as Democrats prepared to vote on the mammoth Build Back Better Act.

The top Republican said the issues America faces rise as the legislative and executive branches are controlled by the Democrat Party.

“Do you know what the common denominator is? One-party rule for one year,” McCarthy said.