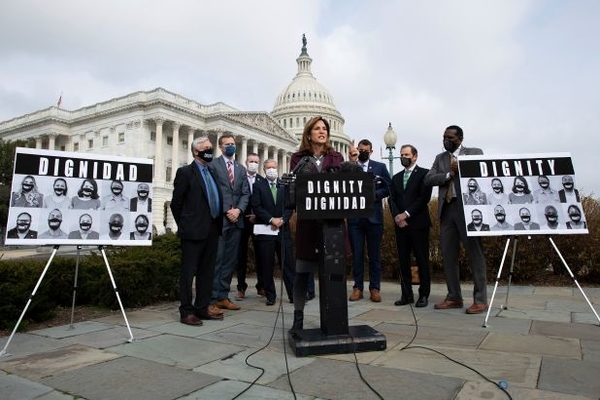 Rep Maria Salazar (R-FL)  unveiled an amnesty plan during a press conference Wednesday.  Green cards would be provided to illegal aliens enrolled and eligible for former President Obama’s Deferred Action For Childhood Arrivals (DACA) program.  Work visas would be given to  11 to 22 million illegal aliens in the U.S.

Salzar is making her mark in her first term by going against the grain of the party’s conservative base on immigration issues.  She challenged Stephen Miler, former Trump White House Aid, on his hard-line messaging on immigration. “I told him that the GOP needs to attract the brown,” Salazar said at the time.

The complete list of GOP lawmakers backing the plan include:

The amnesty is dubbed the “Dignity Proposal.” Those enrolled and eligible for DACA would be given legal resident status to 1.5 to 3.5 Million illegal aliens.  These illegal aliens can apply for green cards and obtain citizenship in America.

Others would be eligible under the amnesty to get a ten-year work visa, as long as they pass a criminal background check, pay taxes, and continue to take American jobs. Under the amnesty status, these illegals would not be eligible for “means-tested benefits or entitlements” and must pay a fine.

“They came here as kids,” Graham said of many illegal aliens. “If you told them to go back to their country, they don’t know where you’re talking about. You’ve had people who have lived here for decades that have worked, hard assimilated into the country, and there’s a place for them under our terms.”

Into the amnesty are provisions that would bring more foreign visa workers to the U.S.  to take seasonal occupations and work on farms.

The amnesty is a “poorly-timed proposal with even worse marketing,” stated RJ Hauman with the Federation for American Immigration Reform (FAIR).  The increase of unemployment by 170 percent  compared to the same time last year and nearly 17 million Americans wanting full-time work:

Now is the time for Republicans in both chambers to unify against amnesty bills rather than introducing their own proposals. A large-scale amnesty for illegal aliens would be a bad policy even under the best of circumstances. Amnesty under the guise of ‘dignity in the midst of a full-blown border crisis is an affront to commonsense and not just Republican voters, but the American people as a whole.

About 1.4 million foreign nationals secure work visas annually to take jobs in the U.S., While more than 1.2 million green cards are given to foreign nationals every year-70 percent of which are relatives awarded naturalized American citizenship.