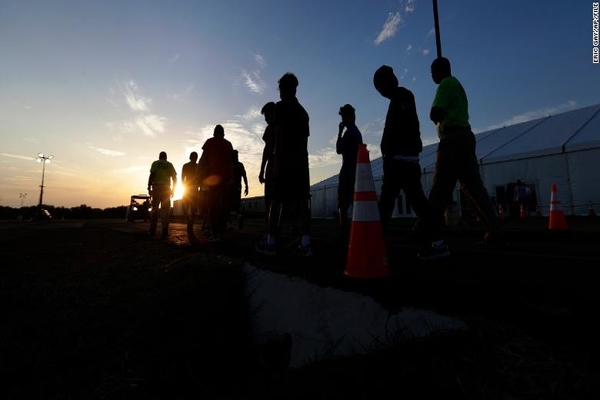 President Biden is continuing his efforts to dismantle President Donald Trump’s efforts to secure the U.S. border with Mexico. Friday, Biden announced the reversal of Trump’s Remain in Mexico policy for migrants seeking refugee status; he will admit at least 25,000 people into the country.

Thousands of migrants will be allowed into the country’s interior, and they will be released into American communities to await legal proceedings.

Biden will continue with the reversal of Remain in Mexico. Despite the Center for Disease Control and Prevention (CDC) that calls for the swift return of migrants to their home country to protect Americans from Covid.

“Beginning on February 19, the Department of Homeland security will take steps to begin processing individuals who, under the previous administration, had been forced to remain in Mexico,” White House press secretary Jen Psaki said on Friday.

ABC7 News reports on the development:

The first of an estimated 25,000 asylum-seekers in Mexico with active cases will be allowed in the United States on February 19, authorities said. They plan to start slowly with two border crossings, each processing up to 300 people a day and a third crossing taking fewer. Administration officials declined to name them out of fear they may encourage a rush of people to those locations.

The move is a major step toward dismantling one of President Donald Trump’s most consequential policies to deter asylum-seekers from coming to the U.S. About 70,000 asylum-seekers were enrolled in “Remain in Mexico,” officially called “Migrant Protection Protocols,” since it was introduced in January 2019.

On Biden’s first day in office, the Homeland Security Department suspended the policy for new arrivals. Since then, some asylum-seekers picked up at the border have been released in the U.S. with notices to appear in court.

As President Biden has made clear, the U.S. government is committed to rebuilding a safe, orderly, and humane immigration system,” Homeland Security Secretary Alejandro Mayorkas” said in the ABC7 News report. “This latest action is another step in our commitment to reform immigration policies that do not align with our nation’s values.”

According to ABC7 News, The Department of Homeland Security (DHS) has said the move “should not be interpreted as an opening for people to migrate irregularly to the United States.”

DHS is setting up a “virtual registration process,” allowing people to apply for asylum online or by phone. From the start of the pandemic in March, “administration officials have said that the vast majority of people who cross the border illegally are quickly expelled under a public health order.” Some of the families seeking asylum have been released in California and Texas. ABC7 News reports this has “worked against that messaging.”

Migrants will be tested for the coronavirus in Mexico before entering into the U.S., the media reports.

Raul Ortiz, deputy chief of the U.S. Border Patrol, said more than 3,000 people per day this week had been stopped crossing the border illegally. Compare this to the 2,426 people crossing during the entire month of January.

Migrants have been arriving at Catholic Charities of the Rio Grande Valley in Texas and Jewish Family Service of San Diego in recent days, according to ABC News 7.

Both locations state that sick migrants would be quarantining in local hotels after testing.