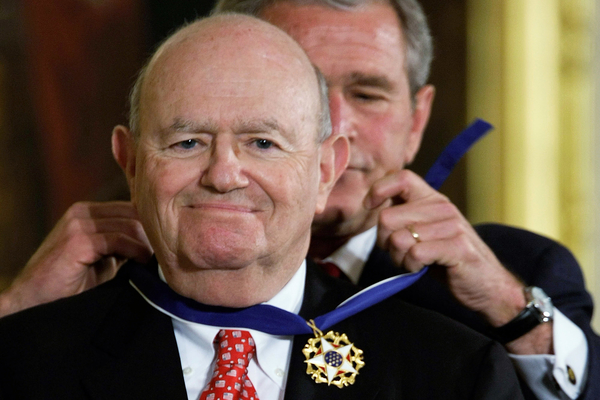 Federal appellate judge Laurence Silberman, Washington DC, accused the New York Times and Washington Post and the Wall Street Journal, to some extent, of “rather shocking” bias against the Republican Party in a written opinion Friday.

“The orientation of these three papers is followed by The Associated Press and most large papers across the country (such as the Los Angeles Times, Miami Herald, and Boston Globe),” he said in the opinion. “Nearly all television—network and cable—is a Democratic Party trumpet. Even the government-supported National Public Radio follows along.”

Further, Judge Silberman wrote that Silicon Valley “also has an enormous influence over the distribution of news,” which “similarly filters news delivery in ways favorable to the Democratic Party.” He called Fox News, The New York Post, and The Wall Street Journal’s editorial page “notable exceptions to Democratic Party ideological control,” though he admitted, “a number of Fox’s commentators lean as far to the right as the commentators and reporters of the mainstream outlets lean to the left.”

“It is well-accepted that viewpoint discrimination ‘raises the specter that the Government may effectively drive certain ideas or viewpoints from the marketplace,'” Silberman said. “But ideological homogeneity in the media—or in the channels of information distribution—risks repressing certain ideas from the public consciousness just as surely as if access were restricted by the government.”

“It should be borne in mind that the first step taken by any potential authoritarian or dictatorial regime is to gain control of communications, particularly the delivery of news,” Silberman added, saying “it is fair to conclude, therefore, that one-party control of the press and media is a threat to a viable democracy. It may even give rise to countervailing extremism.”

Judge Silberman said the Supreme Court should overturn New York Times v. Sullivan, the 1964 case holding that when the media discusses public figures, the outlet should be liable under state defamation laws only if the plaintiffs can prove “actual malice,” which the Court defined as the speaker either knowing the statement was false or making it in “reckless disregard for the truth.”

“The First Amendment guarantees a free press to foster a vibrant trade in ideas. But a biased press can distort the marketplace,” Silberman concluded. “And when the media has proven its willingness—if not eagerness—to so distort, it is a profound mistake to stand by unjustified legal rules that serve only to enhance the press’ power.”