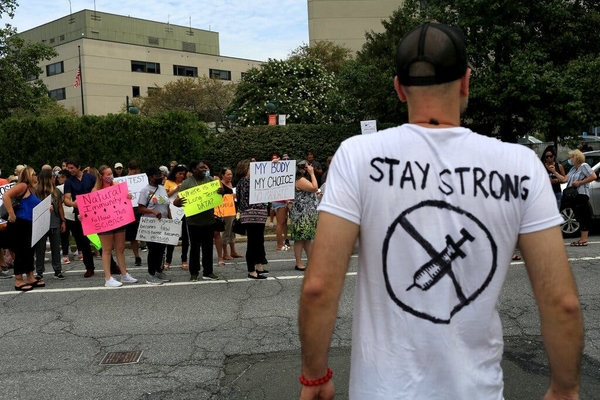 Bill de Blasio (D), Mayor of New York City, has eliminated the testing option for all of the city’s employees while threatening those who do not comply with the mandate by October 29 will be put on unpaid leave.

City workers that receive at least one dose at one of the city-run vaccination sites before 5 pm on the day of the deadline will receive a $500 payment. According to de Blasio’s Wednesday statement, workers who choose not to comply will be put on unpaid leave until they prove at least one shot has been received.

“The voluntary phase was very long,” de Blasio said Wednesday on MSNBC. “Now we’re saying we need you to do this.”

Dr. Dave Chokshi, NY Health Commissioner, will formally sign the order on Wednesday and will apply to approximately 160,500 city employees. According to the city, 71 percent of workers affected by the mandate have already received at least one vaccine dose — meaning 46,545 unvaccinated workers stand to lose their income if they refuse the jab.

In his statement, de Blasio stated it was a “privilege” serving the people of New York City, noting that “privilege” comes with a “responsibility to keep yourself and your community safe.” Many of the mandated city and essential workers served the city before the vaccines were available. According to NYC Health, nearly 66 percent of residents are now fully vaccinated, higher than the national average of 57 percent recorded by the Centers for Disease Control and Prevention (CDC).

“We have led the way against COVID-19 – from fighting for the right to vaccinate frontline workers, to providing nation-leading incentives, to creating the Key to NYC mandate,” he said. “As we continue our recovery for all of us, city workers have been a daily inspiration. Now is the time for them to show their city the path out of this pandemic once and for all.”

The city will begin “impact bargaining” with affected unions, the statement noted. Already, Police Benevolent Association of the City of New York (PBA) President Patrick J. Lynch has released a statement threatening legal action against NY in response to the mandate.

“From the beginning of the de Blasio administration’s haphazard vaccine rollout, we have fought to make the vaccine available to every member who chooses it, while also protecting their right to make that personal medical decision in consultation with their own doctor,” Lynch said. “Now that the city has moved to unilaterally impose a mandate, we will proceed with legal action to protect our members’ rights.”

New York City police and firefighters are included in the new requirement, who have reportedly resisted the mandate more than other government workers. According to the city, also included are employees with the Department of Corrections. They have until December 1 to get the shot, “as the City works diligently to address the ongoing staffing situation on Rikers Island.” According to reports from Breitbart News, inmates have “seized near-total control over entire units” at Rikers Island jail.

The city boasts about the vaccination rates for the educators and health care workers also included in the mandate.

“Department of Education (DOE) and New York City Health and Hospitals (H+H) workers have been subject to vaccination mandates since late September; today, vaccination rates at DOE and H+H are 96% and 95%, respectively,” the statement reads.

Not mentioned by the city were the thousands of healthcare workers and educators that have been fired or on unpaid leave due to the vaccine mandate, as it can boost the appearance of the vaccination rate.