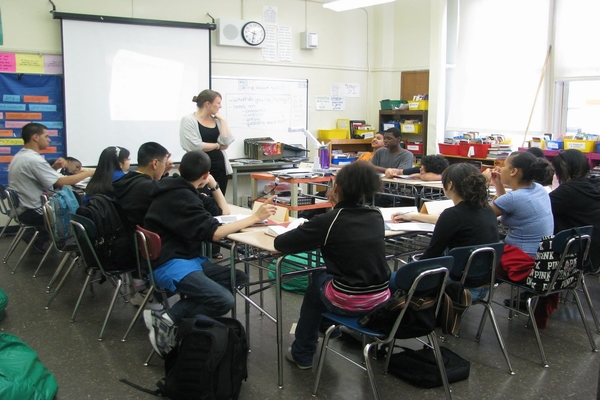 The principal of a public school in New York City has sent literature to parents asking them to “reflect” on their “whiteness” with a ranked list of “White Identities,” the New York Post confirmed Tuesday.

East Side Community School sent the ranked list of “The 8 White Identities”, ranging from “White Supremacist” to “White Abolitionist.” Parents of children attending the school received the literature.

Authored by Barnor Hesse, an associate professor of African American Studies at Northwestern University, the ranked list is introduced with the following statement:

There is a regime of whiteness, and there are action-oriented white identities. People who identify with whiteness are one of these. It’s about time we build an ethnography of whiteness since white people have been the ones writing about and governing Others.

The “white supremacist” identity is found in the “red zone of a color-coded meter.   It is described as “clearly marked white society that preserves, names, and values white superiority. “White abolitionist” is in the green zone, one who “changing institutions, dismantling whiteness, and not allowing whiteness to reassert itself.”

According to the Post, a New York City Department of Education official said some parents at the 6th-12th grade school first shared the handout with school staff. Subsequently, the principal, Mark Federman, distributed the material to every parent “as part of a series of materials meant for reflection” and as ‘food for thought,” the report said.

Department of Education spokesperson said in a statement to the Post:

Anti-racism and the celebration of diversity is at the core of our work on behalf of the young people of New York City, and the East Side Community School’s students, parents, and staff partner together to advance equity in their community.

The document in question was shared with the school by parents as a part of ongoing anti-racist work in the school community and is one of many resources the schools utilizes.

The spokesperson reportedly added that school employees are experiencing threats over the materials.

“Our staff are now being targeted with vile racist, anti-Semitic and homophobic slurs and degrading language from people outside of their school, and nothing justifies the abuse directed at our educators,” the department representative reportedly said.

Principal Federman was arrested after attempting to block security guards.  He was stopping them from embarrassing a 17-year-old student who had been charged with punching a guard in the eye and was about to be removed from the school in handcuffs.

Reportedly Federman demanded the guards remove the girl through a secluded exit preventing her from being seed by other students.

The sponsor of the curriculum is Slow Factory Foundation, a nonprofit seeking to build an “anti-racist community and growing climate-positive global movements,” according to its website.  Critical Race Theory investigator Christopher Rufo of Discovery Institute tweeted the color-coded meter of “white identities.

Education that acknowledges power structures and historical, social context as a key driver of any topic. Focusing on free and open accessibility, ECE initiatives are typically offered without academic admission requirements and distributed online. Open education broadens access to learning and training traditionally offered through formal education systems or corporate programs that are inaccessible to most people.

The offerings for its “equity-based education” are courses with the following titles:

“Special Advisor” to the foundation is designer and actor Waris Ahluwalia