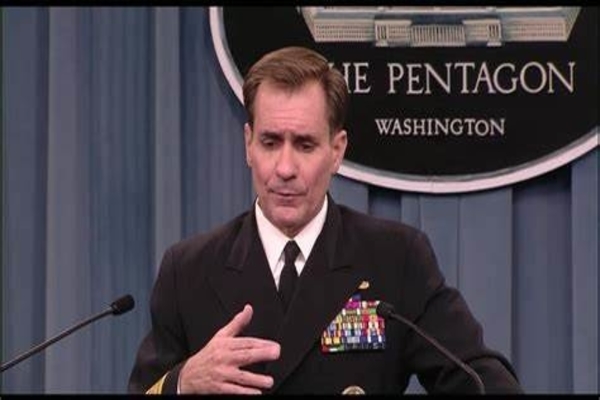 We’re certainly aware of these reports [and] we take it very, very seriously. There are — the — especially in a place like Fort McCoy with winter coming on, and so, NORTHCOM is very mindful of the needs of the weather and the climate and making sure that the evacuees have a safe, clean, warm living environment while they continue this processing.

But we’re mindful about this at all installations here domestically that we have a responsibility to provide that kind of an environment for these individuals and their families to be able to subsist while they continue to work through the immigration process. And again, we’re taking it seriously. I know of no specific request today to conduct an investigation, but the secretary is certainly mindful of the reports.

Kirby added that Defense Secretary Lloyd Austin is “comfortable” that Northern Command commander Air Force Gen. Glen D. VanHerck “also is mindful of these issues and will continue to work closely with our interagency partners to alleviate any concerns; there might be.”

He added that military base commanders are responsible for bases, including the physical environment, housing, and sustenance issues, including medical care, recreation facilities, child care, and religious accommodations.

“Our job is the housing and making sure that there’s a safe environment, a safe and secure environment, for them to complete the processing,” he said.

Kirby was asked about “serious problems” reported at Fort McCoy, he again responded that the Pentagon is “aware” of the reports:

The Department of Justice (DOJ) later announced federal charges against Afghan refugees temporarily living in Fort McCoy since being brought to the U.S. with tens of thousands of other Afghans, Bahrullah Noori, 20-years-old, and Mohammad Haroon Imaad, 32-years-old.

According to prosecutors, Norri is accused of attempting to forcefully engage in sexual acts with a minor and three counts of engaging in a sexual act with a minor, and one count of alleging the use of force.

NoNorri’sndictment states his victims were under 16 and at least four years younger than him.

In a separate incident, prosecutors accuse Imaad of strangling and suffocating his wife while living temporarily at Fort McCoy after arriving in the U.S. from Afghanistan. The alleged assault took place on September 7.

Both men appeared in court in Madison, Wisconsin, on September 16 to face the charges; they are being detained at the Dane County Jail. They arrived as refugees, Special Immigrant Visa-holders (SIVs), P-2 visa-holders, or parolees, and their immigration statuses remain unclear.