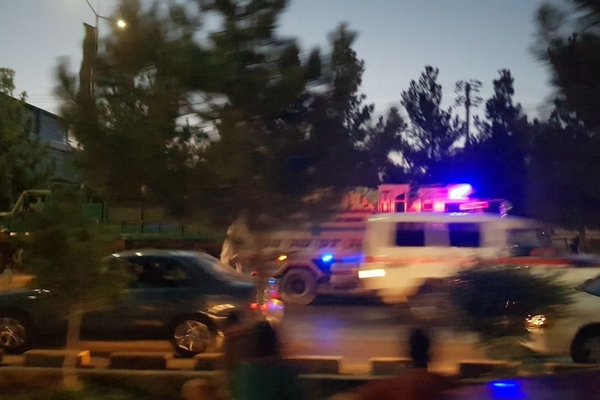 At least 60 people were killed, including 13 U.S. service members, and another 150 people wounded, resulting from twin suicide bombings outside Hamid Karzai International Airport and Baron Hotel in Kabul, Afghanistan.

All times are in eastern.

10:30 P.M. – Reuters reports: “The evacuation of civilians from Kabul has been accelerated after attacks near the airport, a Western security official stationed at the airport.”

9:53 P.M. – Journalists were blocked as VP Harris addressed U.S. troops at Pearl Harbor following the twin suicide bombing outside Kabul Airport, according to a report.

Per the Washington Examiner:

No explanation was given, according to the White House press pool, but the move comes hours after two explosions outside of the airport in Kabul killed 13 U.S. service members and 60 Afghans during evacuations.

“The VP’s staff informed the pool during the flight that her event with troops at Joint Base Pearl Harbor-Hickam would now be closed press. No explanation given by the VP’s team for why it has been changed to closed press when asked by a member of the pool,” the dispatch said.

9:28 P.M. – Former President Trump offers condolences to the families of U.S. service members who died in the Kabul terror attack in a new video.

8:36 P.M. – Rep. Madison Cawthorn (R-NC) announced he formally requested Biden to be removed by his Cabinet by invoking the 25th Amendment.

6:56 P.M. – Biden has ordered flags to half-staff after the killing of 13 U.S. service members in Afghanistan

6:42 P.M. — CBS News reports the updated death toll of U.S. service members in the Kabul airport attack has risen to 13.

6:35 P.M. — Psaki responds to question regarding calls from Republicans for Biden to resign:

[email protected] on GOP calls for Biden to resign: “This is a day where US service members, 12 of them, lost their lives at the hands of terrorists. It’s not a day for politics. And we would expect that any American, whether they’re elected or not, would stand with us.”

5:56 P.M. – Biden admits he bears “responsibility” for the disaster of withdrawal in Afghanistan in an exchange with Fox News Peter Doocey. The president is hunching over while clutching his leather folder as Doocey presses him on the recent events.

5:41 P.M. — Biden says of working with the Taliban: “No one trusts them. It’s not a matter of trust; it’s a matter of mutual self-interest.”

5:33 P.M. — Biden: “We will not be deterred by terrorists. We will respond with force and precision at our time, at the place we choose, and the moment of our choosing. These terrorists will not win. Our mission will go on. America will not be intimidated.”

“Melania and I send our deepest condolences to the families of our brilliant and brave Service Members whose duty to the U.S.A. meant so much to them. Our thoughts are also with the families of the innocent civilians who died today in the savage Kabul attack,” Trump said in a statement. “This tragedy should never have been allowed to happen, which makes our grief even deeper and more difficult to understand.”

4:42 P.M. — Sen. Roger Marshall (R-KS) says: “President Biden must face the American people and address questions on how we will respond to this massacre or he should resign immediately.”

4:01 P.M. —  Taliban spokesman issues statement on latest blast: “Explosions were heard inside Kabul airport after dinner today. These explosions were carried out by American forces to destroy their equipment so that the citizens of Kabul do not worry.”

3:40 P.M. — The Biden administration supplied the Taliban with a list of names of U.S. citizens and Afghan allies as part of an effort to grant them entry to the outer perimeter of Kabul’s airport, Politico reports:

The move, detailed to POLITICO by three U.S. and congressional officials, was designed to expedite the evacuation of tens of thousands of people from Afghanistan as chaos erupted in Afghanistan’s capital city last week after the Taliban seized control of the country. It also came as the Biden administration has been relying on the Taliban for security outside the airport.

But the decision to provide specific names to the Taliban, which has a history of brutally murdering Afghans who collaborated with the U.S. and other coalition forces during the conflict, has angered lawmakers and military officials.

“Basically, they just put all those Afghans on a kill list,” said one defense official, who like others, spoke on condition of anonymity to discuss a sensitive topic. “It’s just appalling and shocking and makes you feel unclean.”

3:37 P.M. — ISIS has claimed responsibility for the Kabul airport attack and has shared the purported terrorist’s photo as NBC News terrorism analyst reported.

3:18 P.M. — Gen. McKenzie is warning that the threat of suicide vehicle in Kabul is “high right now” and says the U.S. military has asked the Taliban to conduct security in the streets.

3:12 P.M. — Gen. McKenzie says the threat from ISIS is “extremely real” and believes they desire to continue attacks and expect attacks to continue.

2:23 P.M. — At least 60 people were killed and 150 injured in explosions at Kabul airport, according to health officials, per the Wall Street Journal.

2:18 P.M. — The death toll of U.S. service members in Kabul is likely to rise, according to U.S. officials, reports Fox News.

1:42 P.M. — The State Department will not hold a briefing today.

1:16 P.M. — More House Republicans condemn Biden over the deadly attacks in Kabul, with Rep. Roger Williams (TX) calling for the president to “resign or be legally removed.”

1:13 P.M. — Pentagon spokesperson John Kirby confirms “a number” of U.S. service members were killed due to the blast outside the airport in Kabul but did not state how many.

The U.S. ambassador in Kabul has told staff there that four U.S. Marines were killed in an explosion at the city’s airport and three wounded, a U.S. official with knowledge of the briefing said. Two explosions ripped through crowds of Afghans trying to enter the airport on Thursday.

12:40 P.M. — Taliban spokesman states the twin Kabul bombings: “The Islamic Emirate strongly condemns the bombing of civilians at Kabul airport, which took place in an area where US forces are responsible for security. The Islamic Emirate is paying close attention to the security and protection of its people, and evil circles will be strictly stopped.”

12:27 P.M. —U.S. Marine and reporter Julio Rosas and others are blasting frequent MSNBC guest Malcolm Nance over his commentary of the deadly Kabul blasts in which U.S. troops were reportedly wounded.

12:17 P.M. — The New York Times reports at least 40 dead bodies and 120 injured have been taken to hospitals across Kabul.

12:16 P.M. — 60 Irish nationals have been behind in Afghanistan as the Irish military departs, according to Independent.ie.

11:30 A.M. — Afghanistan news channel TOLOnews reports: “Taliban spokesman Zabihullah Mujahid confirmed that 52 people had been wounded in two explosions near Kabul airport. He added that the blast also caused casualties, but exact figures are not available.”

11:21 A.M. — ISIS is “definitely believed to be” the culprit behind the attack outside Kabul’s airport, a U.S. official tells the Associated Press.

10:57 A.M. — Pentagon spokesperson John Kirby confirms a “complex attack” has resulted in U.S. and civilian casualties. “We can also confirm at least one other explosion at or near the Baron Hotel, a short distance from Abbey Gate,” the official adds.