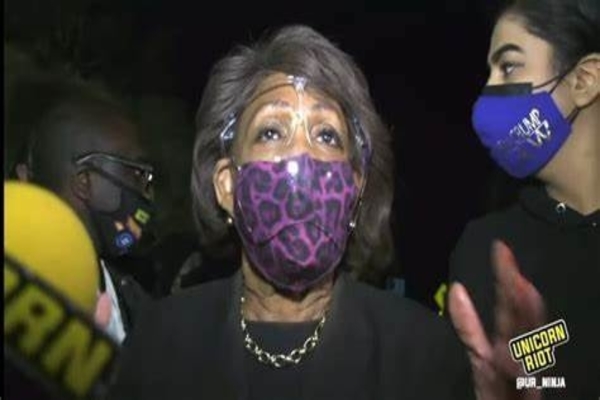 Rep. Maxine Waters (D-CA) asked for a police escort in Minneapolis over the weekend; she went to urge activists to “stay in streets” protesting police.

A document obtained and published by Townhall Monday appears to show the request Waters is listed as the primary protectee with “Police escort In & Out” listed under special requests.

Waters is shown in the video, surrounded by reporters and protesters outside the Brooklyn Center police station. She told citizens to hit the streets unless Chauvin was convicted of murder.

“We’re looking for a guilty verdict,” she said. “And we’re looking to see if all of the talk that took place and has been taking place after they saw what happened to George Floyd, if nothing does not happen, then we know that we’ve got to not only stay in the street, but we’ve got to fight for justice.”

“We’ve got to stay in the streets, and we’ve got to demand justice,” she urged the crowd, who earlier had been chanting, “No good cops in a racist system!,” “F–k your curfew!” and “No justice, no peace!”

“We’re looking for a guilty verdict” in the Chauvin case, Waters said. “And if we don’t, we cannot go away; we’ve got to get more confrontational.”

Some lawmakers have called on fellow Californian Speaker Nancy Pelosi to take action against Waters. Others, including New York candidate for governor Rep. Lee Zeldin and Rep. Marjorie Taylor Greene of Georgia, have called for her expulsion from Congress.

“Maxine Waters is someone who supports mob violence.”

“Waters has never believed in Western justice. For decades, she supported the totalitarian government of Cuba, which replaced jury trials with summary mass executions of entire groups of people.”

“That was fine with Maxine Waters. She’s never had a problem with killing political enemies.”

“Is Maxine Waters greater of guilty of greater incitement than Donald Trump? Well, of course, but that’s not the point.”