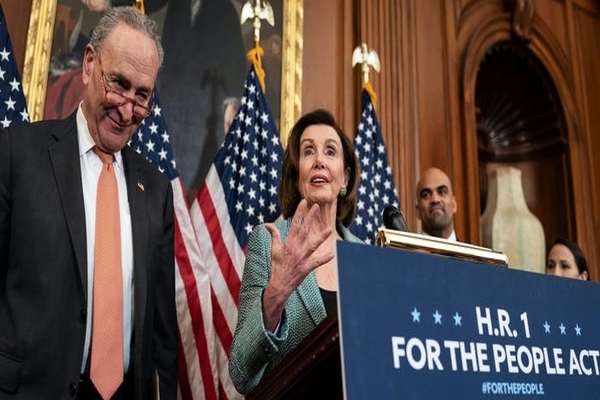 Once again, Hollywood celebrities rally their fans to support H.R.1, the so-called “For the People Act” that would allow the federal government to seize power from states to oversee their elections and gut voter identification requirements.

Left-wing stars including Leonardo DiCaprio, John Legend, and Julia Louis-Dreyfus are claiming that the bill is  necessary not only to provide “convenient” voting access “for all” but also to protect the country from Republicans, who are “suppressing black and brown Americans’ right to vote.”

John Legend campaigned with Joe Biden, while many others publicly endorsed Biden’s bid for the White House.

H.R. 1 would create electoral chaos to benefit Democrats. In a recent interview on PBS NewsHour, House Speaker Nancy Pelosi (D-CA) admitted Democrats would have a better chance of holding the House in 2022 if H.R.1. becomes law, as Breitbart News has reported.

Former Acting Deputy Secretary of the Department of Homeland Security Ken Cuccinelli told Breitbart News that the bill would automatically register adult non-citizens from state databases — including but not limited to state motor vehicle and public health departments voters if enacted as law.

The bill protects illegal aliens from prosecution if they are registered to vote automatically and never made an affirmative declaration that they were U.S. citizens.

Leonardo DiCaprio and John Legend are helping to lead the social media offensive by urging fans to call their senators.

Bradley Whitford, The West Wing star also urged people to contact their senators. The actor was a vocal supporter of Biden’s presidential campaign.