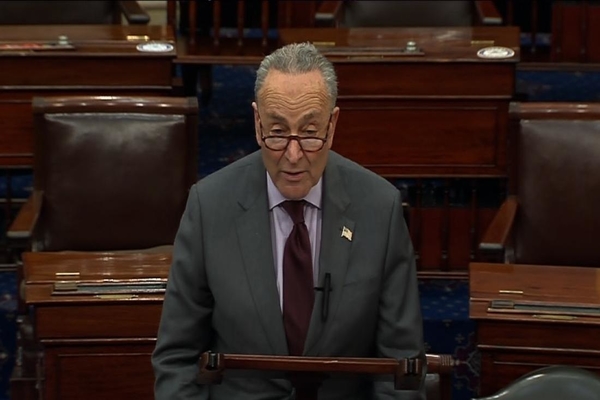 “We call it the Freedom to Cheat Act,” McDaniel said of the Freedom to Vote Act, which Senate Democrats are hoping to pass against Republican wishes by changing the 60-vote filibuster rule.

“It eviscerates state voter ID laws, which 36 states have passed,” the chairwoman said. “This bill eliminates states’ more secure voter ID requirements, replacing them with a process that is rife with fraud.”

The sweeping bill would order states with voter ID laws to widen their accepted forms of voter identification to allow for several alternatives, including forms of identification that do not contain a photo.

The influential conservative thinktank Heritage Foundation, which has actively been lobbying states to tighten their election processes, deems “model” voter ID rules to be those that require voters to present a government-issued ID that contains a photo and makes clear that the voter is an American citizen when they go to cast their ballot. In December, Heritage scored states on this metric and found six states, including Georgia — a state that has become ground zero in the fight over election laws — received perfect scores in regard to voter ID laws specifically. Another 22 states received at least partial credit or more for their voter ID laws.

“Most voters reported they didn’t face any obstacles at the polls,” the AJC wrote. McDaniel also noted voter turnout in Atlanta increased by 17 percent.

The chairwoman added that boycotts that took place, namely by Major League Baseball, over the election bill happened because Democrats like Biden and voting rights activist Stacey Abrams publicly misrepresented it. She noted the Washington Post fact-checking Biden at the time, awarding the president “four Pinocchios” for his remarks on one of the bill’s provisions.

“Georgians lost out on $100 million in projected revenue. Businesses that had been struggling through the pandemic who were counting on that revenue lost out because of lies told by Joe Biden and Democrats about the Georgia law,” McDaniel said. “Everything they said was a lie.”

McDaniel also noted the Freedom to Vote Act “would force 29 states to adopt same-day voter registration. It forces [states] to let violent felons vote. I mean, the list goes on and on about how bad, how truly bad this bill is.”

Senate Democrats, led by Senate Majority Leader Chuck Schumer (D-NY), have conveyed serious interest in voting on changing Senate rules as early as sometime in the next week to push through election reforms, despite two Democrats remaining opposed to changing the 60-vote filibuster rule, the key rule that — if changed or circumvented — would allow Schumer to pass election reforms with a simple majority of senators rather than 60.