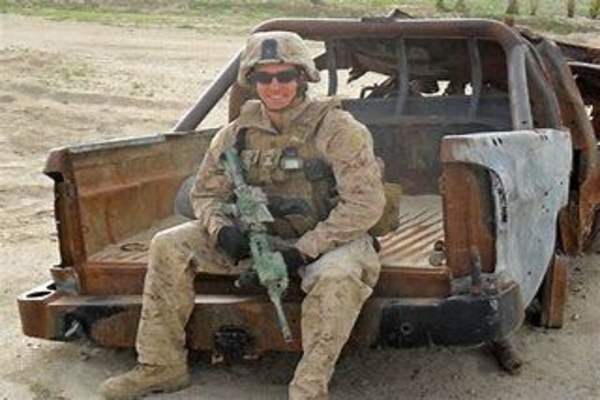 Marine Lt. Col. Stuart Scheller announced in a video on Sunday that he is resigning his commission as a Lieutenant colonel in the Marine Corps after asking for accountability from senior leadership on the botched withdrawal in Afghanistan; he was fired a battalion commander.

In his original video, posted after the deaths of 13 service members, one he knew personally, he said,  “I want to say this very strongly. I have been fighting for 17 years. I am willing to throw it all away to say to my senior leaders I demand accountability.”

Scheller posted the first video on August 26 at 8:47 PM; he understood he could be fired for the video but stated:

I want to say this very strongly. I have been fighting for 17 years. I am willing to throw it all away to say to my senior leaders I demand accountability.

The next day Scheller posted he had been fired as commander of the Advanced Infantry Training Battalion at 2:30 PM – less than 24 hrs after he posted his video. In a Facebook post, he said:

To all my friends across the social networks. I have been relieved for cause based on a lack of trust and confidence as of 14:30 today.

On his video Sunday, he announced he was resigning his commission as an officer in the Marine Corps- short of the 20 years needed to be eligible for lifelong retirement and medical benefits.

I want to make the announcement today. After 17 years, I currently not pending legal action, and I can stay in the Marine Corps for another three years, but I don’t think that’s the path I’m on. I’m resigning my commission as a United States Marine effective now. I’m sure there’s some [Marine Administrative Message] on how I’m supposed to do that, and I’ll work through that. But I have forfeiting my retirement all entitlements. I don’t want a single dollar. I don’t want any money from the VA.

I don’t want any VA benefits. I’m sure I’m entitled to a hundred percent. I, you know, breathe on the smell and smoke of burning shit for years. I don’t want any of it. All I asked for was accountability of my senior leaders. When there are clear, obvious mistakes that were made, I’m not saying we can take back what has been done. All I asked for was accountability for people to comment on what I said and to say, ‘Yes, some mistakes were made and had they done that. I wouldn’t have gone back into rank and file, submitted, and accomplished what I wanted the morning after I posted my video and I came into work; my boss came in, and he asked me, ‘What were you trying to accomplish?’

And that was a very tough question for me. And my response was I want senior leaders to accept accountability. I think them accepting accountability would do more for service members and PTSD and struggling with purpose than any other transparent piece of paper or message. And I haven’t received that. For the over $2 million that I would potentially receive in retirement for the rest of my life, for the however much extra the disability would be, I think that money should go back to all the senior general officers, because I think they need it more than I do because when I am done with what I’m about to do, you all are going to need the jobs and the security.

I want to be clear that I love the Marine Corps. I think, you know, there’s been a fascination with special forces over the last 15 years, special forces people that come in in the middle of the night and they killed the biggest targets that the United States has. And I have much respect. I worked in [Marine Special Operations Command] for a year, but what I’ll say is the conventional Marine on the ground who has to smell burning shit. Who, when I was in Ramadi, I was exposed to it so much that burning shit actually smelt like bacon and eggs. And I grew to enjoy the smell. Those people who are there every day don’t get to leave the next morning or in the middle of the night, who go outside the wire, get blown up, bring their Marine back and then go back out there the next day. They don’t get the credit they deserve, and they deserve accountability. ….

You have no idea what I’m capable of doing. To all the congressmen, senators, every media station, across the globe, to all the rich philanthropists, I appreciate the support, and I’m going to need your support. … I don’t need a single dollar. I just need every single person that’s willing to go back outside the wire every single day to wear a blue collar and just go into work every single day and feed their families; those are the people that I need. Follow me, and we will bring the whole fucking system down. I am honorable. You can ask any Marine who served with me for 17 years. I dare you to ask them all and find out what I’m made of. We’re just getting started.

Scheller’s initial video stoked comparisons to the treatment given to Vindman. Vidnman helped launch an impeachment against then-President Donald Trump, but House Democrats and the media protected him, the Army and Pentagon ultimately approved his promotion to colonel.

On Sunday, Donald Trump Jr. weighed in on the comparison between Scheller and Vindman. He tweeted, “I remember when ‘military leadership’ wasn’t an oxymoron. It’s no wonder they can’t see the obvious coming anymore. The best bureaucrats and the absolute worst war-fighters are the ones that get promoted and make the decisions.”

Vindman claimed he had listened in on a July 25, 2019, classified phone conversation between Trump and Ukrainian President Volodymr Zelensky; he was upset by what he perceived to be Trump pressing Zelensky to dig up dirt on then-candidate Joe Biden and son Hunter.

Instead of filing a DOD whistleblower complaint, since he was a Department of Defense employee who was detailed to the NSC at the time, Vindman went with his twin brother Eugene Vindman. An NSC lawyer, to tell NSC General Counsel John Eisenberg about his concerns, but he also then relayed the contents of that call to a friend in the intelligence community, who then launched an IC whistleblower complaint about the phone call.

Fearing the whistleblower complaint would be buried, the “whistleblower” and his allies in the IC then went to House Intelligence Committee Chairman Adam Schiff (D-CA)’s office. The existence of the complaint was leaked to the media shortly.

After Vindman testified during the House impeachment inquiry of Trump in November 2019, the media demanded to know if he would be protected against retaliation.

A journalist asked at a Pentagon briefing on November 11, 2019:

Q:  Alexander Vindman has been in the news.  A lot of service members are going to be wondering if his career is toast after testifying?  Should I take the risk of whistleblowing if I am witness to fraud, waste and abuse?  What would you tell them …?

SEC. ESPER:  You know, DOD has protections for whistleblowers.  They’re guaranteed law, and — and he should have no – shouldn’t have any fear of retaliation.  That’s DOD’s position.

SEC. ESPER:  He and anybody, any other whistleblower, right?

Q:  Right, so you’re going to — are you going to be reinforce that message periodically?

SEC. ESPER:  I’ve already spoken to the secretary of the Army about that.

Vindman continued to serve at the White House until February 2020, when Trump removed him from his term at the NSC. However, Vindman was approved for promotion to colonel but instead retired in June 2020.