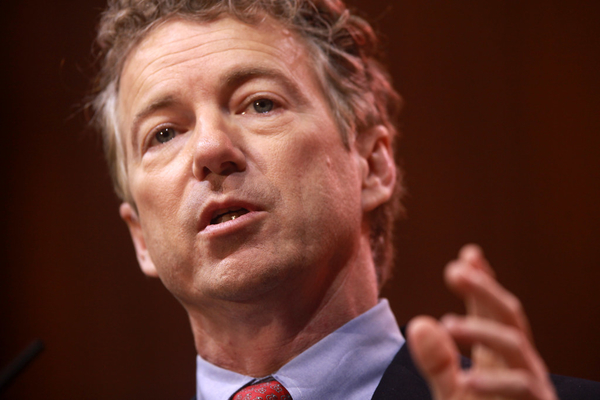 Sen. Rand Paul (R-KY) went after Dr. Fauci during a hearing on the coronavirus Tuesday over his previous claim that the National Institutes of Health (NIH) never funded gain-of-function research in the Wuhan Institute of Virology.

Paul’s presentation enraged President Biden’s chief medical adviser, and he refused to retract his statement on May 11; instead, he brazenly told Paul, “you do not know what you are talking about.”

“Dr. Fauci, as you are aware it is a crime to lie to Congress,” Paul began during the Senate Committee on Health, Education, Labor & Pensions hearing Tuesday, reminding Fauci of his previous remarks to the committee on May 11th, during which the National Institute of Allergy and Infectious Diseases (NIAID) director stated that the NIH has not ever and does not now fund gain of function research in the Wuhan Institute of Virology.

“And yet, gain-of-function research was done entirely in the Wuhan Institute … and was funded by the NIH,” Paul said, citing Wuhan Virology paper entitled, “Discovery of a Rich Gene Pool of Bat SARS-Related Coronaviruses.”

“In this paper … she credits the NIH and lists the actual number of the grant that she was given by the NIH,” Paul said. “In this paper, she took two bat coronavirus genes, spiked genes, and combined them with a SARS-related backbone to create new viruses that are not found in nature.”

These lab-created viruses within to shown to replicate in humans. These experiments combine genetic information from different coronaviruses that infect animals but not humans to create novel artificial viruses able to infect human cells. Viruses that in nature, only infect animals were manipulated in the Wuhan lab to gain the function of infecting humans. This research fits the definition of the research that the NIH said was subject to the pause in 2014 to 2017 — a pause in funding on gain of function. But the NIH failed to recognize this, defines in a way, and it never came under any scrutiny.

Dr. Richard H. Ebright, a molecular biologist from Rutgers, described the Wuhan research as matching the “definition of gain of function research done entirely in Wuhan for which there was supposed to be a federal pause,” was cited by Paul.

Paul asked, “Dr. Fauci knowing that it is a crime to lie to Congress, do you wish to retract your statement of May 11 where you claimed that the NIH never funded gain of function research in Wuhan?”

However, Fauchi refuses to retract his statement, and he maintained that gain of function did not occur.

“Senator Paul, I have never lied before the Congress, and I do not retract that statement. This paper that you were referring to was judged by qualified staff up and down the chain as not being gain 0f function — let me finish!” he said as Paul interjected.

“You take an animal virus, and you increase this transmissibility to humans; you’re saying that’s not gain of function?” Paul asked.

“It is not,” Fauci said as Paul continued.

“It’s a dance, and you’re dancing around this because you’re trying to obscure responsibility for four million people dying around the world from a pandemic,” Paul added.

In May, Fauci admitted NIH funded the Wuhan lab but denied gain of function research, defining it as “taking a virus that could infect humans and making it either more transmissible and/or pathogenic for humans.”

“That categorically was not done,” Fauci claimed.

There was gain of function research going on with Dr. Shi Zhengli at the Wuhan Institute.

It’s listed at the end of the paper. This paper was filed by NIAID research, and it lists a ten-digit number that identifies the research money she got from the United States. Was it gain of function?

Well, it took a SARS virus, which is a coronavirus, that’s 15 times more deadly than COVID, and it added to it S protein, which is something in the surface of it, to make it more easily infectious to epithelial cells for the respiratory tract. That, to me, is gain of function.

Paul called for Fauci to be “removed from a position of authority” on Monday: