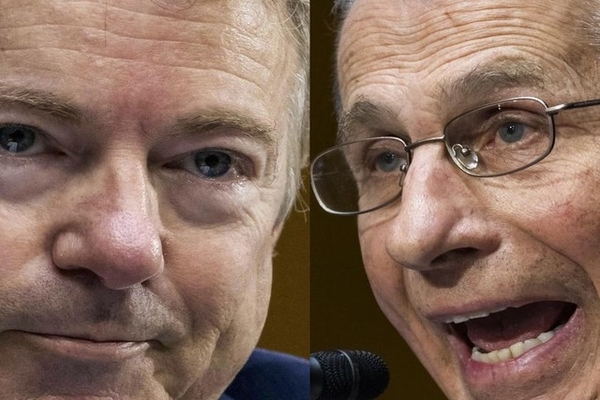 Sen. Rand Paul (R-KY) calls for criminal charges and “five years in prison” for Dr. Fauci after being exposed for lying to Congress about his role in covering up the origins of COVID-19.

“I find that hard to believe that we still would have someone with such poor judgment, who believes that even a pandemic would be worth it, that this person is in charge of the research for our government, I find that astounding,” Paul said during an appearance on Fox News’ Hannity on Wednesday night.

He told Hannity of the consequences of lying to Congress if Dr. Fauci should be charged with federal crimes.

“We’ve referred it to the Department of Justice. I don’t think Biden’s Department of Justice will do anything with it, but yes, it is very dangerous to have public officials who we need to have trust in coming and lying to us, but he has lied dozens of times,” Paul continued.

“Usually, he tells us that it’s for our own good, but yes, he has dissembled, he has obfuscated—there’s other nicer words—but he has definitely lied to the American public, and he should be held responsible but not just that,” he added.

Paul believes it is time for the American Mengele to be removed regardless of whether Dr. Fauci is prosecuted or not.

“The judgment that we should continue to fund this lab and—that the virus in all likelihood came from the lab. I think it’s such incredibly poor judgment that he should be immediately removed,” Paul said.

The origin story of the China virus is a sore spot, as Jen Psaki, White House press secretary, runs like a coward after she was asked about feds funding the gain-of-function in Wuhan that ultimately led to the pandemic.

Paul must keep battling against big pharma, big tech, and politicians because the truth is the only thing preventing the globalist from using COVID-19 as the crisis to usher in a one-world government.