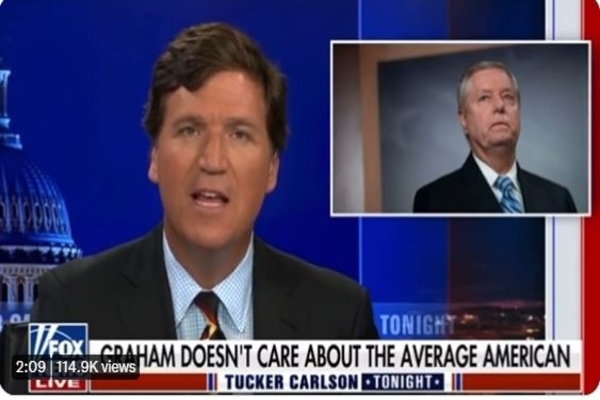 Notice: This article may contain commentary that reflects the author’s opinion. (trendingpolitics)

“My point to people here at home is you can expect gas prices to go up, you can expect food costs to go up. And I can tell you from history, anytime we sit silent and watch the rights of one group be eviscerated, it’s just a matter of time before it comes back to haunt us.”

Well, Tucker Carlson wasn’t going to let Lindsey Graham the RINO get away with minimizing the sacrifices of Americans while indirectly calling for war with Russia. Ripping into him, Carlson said:

“It’s a little galling to be lectured by people with impossibly generous congressional pensions about sacrifices that you get to make.

But it’s especially infuriating to hear the last guy who’s speaking of food prices – who’s skipped very few meals recently – tell you that looking at history informs you of everything you need to know about the future. Really?”

But Tucker didn’t end his takedown of Lindsey Graham there. Rather, he ripped the RINO Senator and his pro-war sensibilities to pieces, calling him out on his past history of empty rhetoric and bad decisions, decisions that haven’t helped the average American one iota. Should USA get involved with Ukraine/Russia conflict?* Yes No Email* This poll gives you free access to our premium politics newsletter. Unsubscribe at any time.

First, Carlson blasted Graham for his vacuous reference to “history” and lack of elaboration, pointing out that Graham didn’t do a thing to deal with the military’s stunning, humiliating defeat in Afghanistan:

What sort of history are we talking about? How about last year, when the withdrawal from Afghanistan humiliated, degraded, and weakened this country? Did Lindsey Graham, who supposedly cares about the military, do a single thing to improve it? Did he call for the resignation of any person responsible for that humiliating disaster that resulted in the deaths of American citizens?

No, he didn’t. And those same people are now in charge of our strategy in Ukraine. So you can call that history and it might be worth learning from it.

Tucker then, briefly, turned from Graham specifically to the ruling caste in general, blasting them for the disasters they’ve created by intervening abroad in situations they don’t understand, fouling everything up in the process:

And one of the things you learn is the people currently in charge have an extensive and easily verifiable track record of failure when they intervene into the highly complex affairs of other countries, countries whose languages they don’t speak and whose histories they don’t understand – people who, by hubris and boredom, wind up interjecting themselves into places they know nothing about.

Tucker then returned to Lindsey Graham, ripping him for having never done anything, anything at all, to help his fellow Americans. Instead, like the other oligarchs, he’s just made things worse for average people while himself profitting. In Tucker’s words:

But the bigger question really for Lindsey Graham is, when is the last time he did anything – one thing – to improve the life of an American citizen other than himself? “Gas prices are up, food prices are up.” Well, that’s ok, because it won’t affect Lindsey Graham. He doesn’t have kids! And he’s got that generous congressional pension. He’s set.

But what about you? Well, you’re going to be repaid in virtue. Now, it’s not cash! It’s not even cryptocurrency! It’s better. For the rest of your life, you can feel good about having supported something called democracy, something that is in shorter supply in this country than it’s ever been, but something we hope to defend in a country you can’t identify on a map. So, you may be poor. In fact, it’s almost certain that you will be, but you can be very proud of that. And by the way, if you don’t do that, you’re a murderer.

Tucker is right. Lindsey the RINO is one of those sad vestiges of days past, days when the RINOs ruled, that stands as a testament and reminder of why we can’t trust the oligarchs to make decisions that are good for America rather than just being good for them. Graham wants war with Russia so that he looks tough; it’s your son that would pay the cost and die in Donetsk.