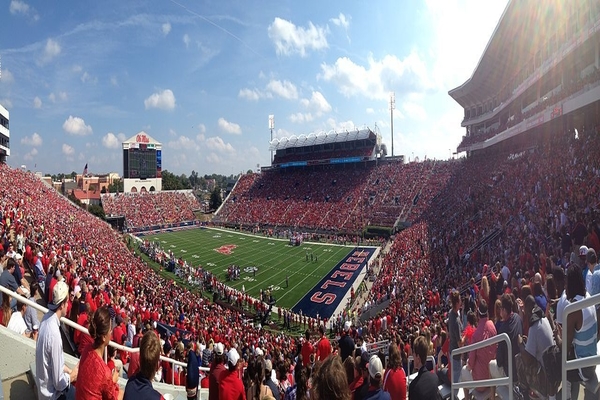 “Fuck Joe Biden” has been chanted at college football games for the second week in a for following yesterday’s game between Auburn and Alabama State.

In the wake of the controversial vaccine mandate, the disastrous withdrawal from Afghanistan, and the drone strike that reportedly killed a longtime U.S. aid group worker and family along with seven children in Kabul, President Biden is being called out by Americans.

A video showing fans -primarily in the student section – chanting, “fuck Joe Biden was tweeted from the account @OldRowViral. The video is from September 11 Alabama State and Auburn football game.

Last week, “fuck Joe Biden” chants were captured on video at college football stadiums across the country; the first video seems to come from Coastal Carolina’s initial game on September 2.

The chant also echoed throughout Lane Stadium, the home of Virginia Tech Hokies.

Donald Trump Jr. addressed the chants in an interview with David Hooksstead of the Daily Caller. Hookstead asked if Trump was surprised it was the student section chanting in most cases. Trump explained Biden’s incompetency is obvious to Americans. He first cited the disastrous withdrawal from Afghanistan then continued to other areas Biden has fallen short on:

You look to the border; then you look to inflation and the economy, then you look to all of these things, and then the way they talk down to you, whether it was yesterday, you know, Joe Biden angry screaming at you. People are seeing it. The media, even with their best effort, cannot cover up this level of incompetence, this trampling of our basic American and fundamental rights. They’re seeing it; you can’t hide from it.